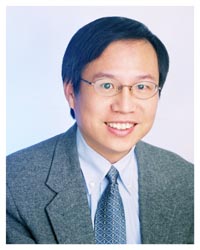 Tzi-Dar Chiueh was born in Taipei, Taiwan on in 1960. In 1983, he received the B.S.E.E. degree from the National Taiwan University, Taipei, Taiwan.  He also received the M.S. and Ph.D. degrees in electrical engineering from the California Institute of Technology, Pasadena, California, in 1986 and 1989, respectively.

Since 1989, he has been at the Department of Electrical Engineering, National Taiwan University, where he is presently a Professor. In 2004-2007, he served as the Director of the Graduate Institute of Electronics Engineering in the same university. He has held visiting positions at ETH Zurich Switzerland in 2000-2001 and at State University of New York at Stony Brook in 2003-2004. His research interests include IC design for digital communication systems, neural network, and signal processing for bio-medical systems. Between November 2010 and Jan 2014, he served as the Director General of the National Chip Implementation Center (www.cic.org.tw) in Hsinchu, Taiwan. He also served as the Vice President of the National Applied Research Laboratories (www.narlabs.org.tw) between May 2015 and Feb. 2017