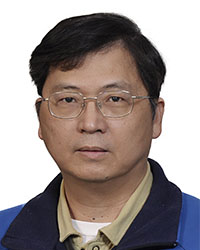 Prof. Hsi-Tseng Chou (周錫增) received the B.S. degree in electrical engineering from National Taiwan University in 1988, and the M.S. and Ph. D. degrees in also electrical engineering from the Ohio State University (OSU) in 1993 and 1996, respectively. After completing his military obligation, Prof. Chou joined ElectroScience Laboratory (ESL) in OSU as a graduate research associate during 1991-1996 and as a post-doctoral researcher during 1996-1998. He is currently a distinguished professor in the Department of Electrical Engineering, National Taiwan University, Taiwan.

Prof. Chou research interests focus on the high-gain and smart antenna technologies (including antenna-in-package (AiP) and antenna-in-module (AiM)), and covers a wide range of technologies to realize them including antenna electromagnetic theories, numerical simulation techniques and measurement techniques of antenna characterization. His team is one of the key research teams in the world to develop the asymptotic high frequency techniques in both real and complex spaces, and has develop numerous Uniform Geometrical Theory of Diffraction (UTD) solutions based ray and beam techniques to interpret the radiation mechanisms of electrically large antennas. These techniques have been implemented in the antenna design codes, and have been demonstrated to be highly efficient in the design of high-gain antennas including reflector, reflectarray and phased array of antennas.

Prof. Chou works very closely with antenna industries to develop the antenna technologies of great potentials in industrial applications. He has been consultants to nine antenna related companies in Taiwan. He has dedicated much effort to cultivate Taiwan’s new antenna industries from startup including satellite DTV reception antennas, point-to-point microwave link antennas and outdoor mobile base station antennas industries, where the collaborating companies have now become the major worldwide suppliers. His work has led to form a “High-Gain and Smart Antenna Industrial Technologies Consortium” in Taiwan, in which an industrial cluster of high-gain antennas in especially the applications of satellite and mobile communication antennas has been formed. During his 20 years of academic career, he has collaborated with more than 36 antenna related companies and 12 research organizations in Taiwan, where most of them are very active companies in the worldwide markets.

Prof. Chou is an IEEE Fellow and IET Fellow, and an elected member of URSI International Radio Science for his contributions to the development of high-gain antennas. He has published more than 143 international journal articles, 325 international conference papers, two EM book chapters and one book. He has also filed more than 40 antenna patents. His works in education and technical researches have been well recognized by the domestic and international technical societies by receiving numerous awards. In education, he received the IEEE technical field award—Undergraduate Teaching Award in 2014, and has received the Outstanding Branch Counselor Awards from IEEE headquarter, R-10 and Taipei section in 2008, 2007 and 2008, respectively. He was also appointed as a Distinguished Lecturer by the Taiwan Electromagnetic Industry-Academia Consortium in 2013 to present technical lectures in the universities and industries. His service as the chair of IEEE AP-S Taipei chapter has made the chapter receiving the Best Chapter Award in 2012.

In the research, his works to promote industry-academia collaboration and cultivate the antenna industries in Taiwan has made him receiving the Outstanding Industry-Academia Collaboration Award (2004) from the Ministry of Education (MoE), and University’s Contribution to the Industrial Economics Award (2008) and National Award for Industry Innovation—Industry-Academia Contribution Award (2017) from Ministry of Economic Affairs (MoEA), Taiwan, respectively. His distinguished work in the high-gain antennas has made him receiving the National Award for Industry Innovation—Key Technology Elite Award in 2011 from MoEA, and Science/Technology Management Award in 2014 from the Chinese Society for Management of Technology, Taiwan. Among others, he received a Best Paper Award of Journal Publication, Best Poster Paper Award and Best Paper Award in 1998, 2014 and 2015 from OSU-ESL, PIERS and IEEE MAPE, respectively. He received the Young Scientist Research Paper Award from Academic Sinica Taiwan in 2002. He has won 7 medals (2 Golds, 3 Silvers and 2 Bronzes) for the patent competitions in Taipei International Invention Show and Technomart during 2012-2015. He was elected as the Distinguished Professor from Chinese Institute of Engineers (CIE), Chinese Institute of Electrical Engineering (CIEE) and Hsu Yo-Hsian Educational Foundation (2 times), in 2004, 2009 and (2005, 2008), respectively. He was elected as the Y-Z Chair Professor 3 times from Hsu Yo-Hsian Educational Foundation in 2006, 2007 and 2011, respectively. He was elected as the Nation’s Top 10 Rising Star in 2006 by the Central New Agency of Taiwan, the Nation’s Top Ten Young Person in 2004 from Junior Chamber International, Taiwan, and received the National Young Person Medal in 2005 from China Youth Corps, Taiwan.

Summary of Honor and Awards:
A. Government Organizations:

(3) 「Award of University’s Contribution to Industrial Economics」 (2008) from Ministry of Economic Affairs.

(5) Product resulted from the inter-university and industries collaboration was elected as one of the year’s 11 most distinguished products in Hsin-Chu National Science Park of Taiwan (The most largest and important science park of Taiwan). (2002)

(7) Gold Medal for the Patent “Multi-Band and Multi-Satellite DTV Reflector Antenna and its Multi-Feed Components”, in 2015 Taipei International Invention Show and Technomart.