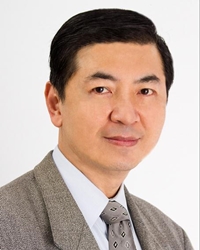 Li-Chen Fu received the B.S. degree from National Taiwan University in 1981, and the Ph.D. degree from the University of California, Berkeley, in 1987. Since 1987, he joined National Taiwan University, and was awarded Lifetime Distinguished Professorship and Irving T. Ho Chair-professorship in 2007. Currently, he serves as Director of NTU Center for Artificial Intelligence (AI) and Advanced Robotics as well as Co-director of MOST (Ministry of Science and Technology)/NTU Joint Research Center for AI Technology and All Vista Healthcare. He has also served as the university Secretary General from 2005 to 2008. His areas of research interest include Robotics, Visual Detection and Tracking, and Control Theory & Applications.

Dr. Fu has been extremely active and highly regarded in his technical field. He has served as the Program Chair of 「2004 IEEE Conference on Control Applications (CCA)」. In terms of the editorial work, he has served as Associate Editor of the prestigious control journal, called Automatica from 1996 to 1999. Starting from 1999, he started a new international control journal, called Asian Journal of Control, and became an Editor-in-Chief of the journal till now. Due to his profound academic reputation, he was appointed as Vice-President for Publication of Asian Control Association (ACA) since 2006, and then was elected as President of ACA during 2012–2013. Due to his active role in international control community, he was elected as BoG member of IEEE Control Systems Society (CSS) from 2014 to 2016, and is now serving as a Vice President for Membership of IEEE CSS.

Dr. Fu has received numerous recognitions for his outstanding performance in research and education during his almost 30 year technical career. Domestically, he has received multiple Distinguished Research Awards from Ministry of Science & Technology (MOST) before 2000, Outstanding Youth Medal in 1991, Ten Outstanding Young Persons Award in 1999, Outstanding Control Engineering Award from Chinese Automatic Control Society (CACS) in 2000, Industry-Academia Collaboration Award from Ministry of Education (MOE) in 2004, TECO Technology Award in 2005, Outstanding Research Award from Pan Wen Yuan Foundation in 2012, and Academic Award from MOE in 2015. Internationally, he was awarded IEEE Fellow in 2004, has been elected as a Distinguished Lecturer for IEEE Control Systems Society from 2013~2015, was awarded 「Wook Hyun Kwon Education Prize」from Asian Control Association in 2015, was elevated to IFAC Fellow in 2016, and was awarded 「Outstanding Service Award」from Asian Control Association in 2017.