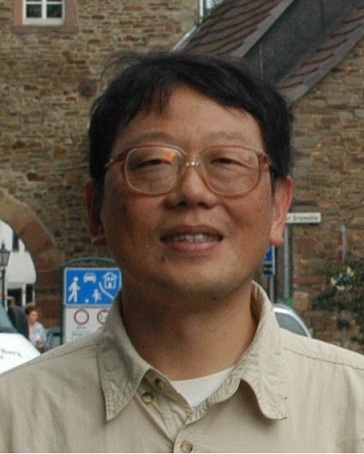 Hao-Hsiung Lin (林浩雄) was born in Taichung, Taiwan, 1956. He received the B.S., M.S., and Ph.D degrees in electrical engineering from National Taiwan University, Taiwan in 1978, 1980, and 1985, respectively. During his Ph.D. work, he invented the emitter-thinning structure of heterojunction bipolar transistor (HBT), which is currently used in commercial HBTs. He has been with the Department of Electrical Engineering at National Taiwan University since 1980, and was promoted as a full professor in 1992. He was a visiting scholar at Stanford university, working on molecular beam epitaxy and deep-level transient spectroscopy, in 1985. From 2001 to 2004, he served as the vice chairman of the Department of Electrical Engineering, National Taiwan University. His research area is the molecular beam epitaxy (MBE) of III-V compound semiconductors. Besides the aforementioned HBT structure, he invented the first InAsN mid-infrared quantum well laser operating at 2.4 mm. His current research interests are on the MBE growth of dilute nitrides, mid-infrared semiconductors, and nano-hetero-epitaxy of compound semiconductors. Dr. Lin is a member of the Chinese Institute of Engineers and a senior member of IEEE.