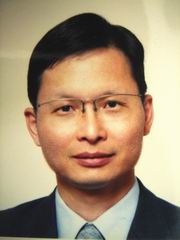 Chii-Wann Lin received his B.S. from Department of Electrical Engineering, NCKU in 1984. He then started his career in biomedical engineering with M.S. degree from Graduate Institute of Biomedical Engineering, NYMU in 1986. He received his Ph.D. from CWRU, USA in 1993. He joined the Center for Biomedical Engineering, College of Medicine, NTU from Sept. 1993. He is now a professor in Institute of Biomedical Engineering and holds joint appointments in both Department of Electrical Engineering and Institute of Applied Mechanics, NTU. He is also a member of IEEE EMBS and Chinese BMES. He was the President of Taiwan Association of Chemical Sensors (ACST) from 2008-2010 and served as the chairperson for international steering committee of ACCS 2013 and ACCS 2015. He is director of NTU-ITRI Joint Nano Research Center from Sept. 2014. His research interests include biomedical micro sensors, optical biochip, surface plasmon resonance, bio-plasmonics, and e-health devices. He has involved in two medical device startup companies based on technology transfer from his research outcomes.