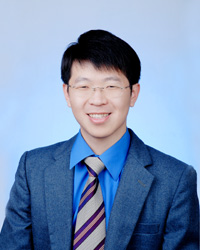 Tian-Li Yu was born in Taipei, Taiwan on June 12, 1975. He graduated from the National
Taiwan University in Taipei, Taiwan with a bachelor degree in Electrical Engineering in
1997. He arrived the University of Illinois at Urbana-Champaign to pursue graduate study
in Computer Science in 2000 and became a member in the Illinois Genetic Algorithms
Laboratory in 2001. He received his master and Ph. D. degree from the University of Illinois at Urbana-Champaign in Computer Science in 2003 and 2006, respectively. Starting from 2007, Yu engaged in academic work as an assistant professor in the National Taiwan University.