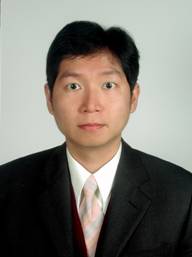 Hsin-Shu Chen (陳信樹) received B.S. degree in electrical engineering from National Taiwan University, Taiwan in 1989, and M.S. degree from University of California at Los Angeles in 1992. He received his Ph.D. degree from University of Illinois at Urbana-Champaign in 2001. He was a full-time teaching assistant with the Department of Electrical Engineering at National Taiwan University from 1989 to 1990. From 1992 to 1993 he was with LinCom Corporation in Los Angeles, California, where he was involved in satellite communication system design and firmware design for spread spectrum cordless phone. From 1994 to 1996 he was a graduate research assistant in the Coordinated Science Laboratory of the Department of Electrical and Computer Engineering in the University of Illinois at Urbana-Champaign, concentrating on the design of analog-to-digital converters. From 1996 to 2002 he was with Intersil Corporation in Melbourne, Florida, as a data converter design engineer. From 2002 to 2003 he was with Maxim Integrated Products Inc. Melbourne Design Center as a mixed-signal circuit designer. Since 2003, he has been with the Department of Electrical Engineering, National Taiwan University, Taipei, Taiwan and now he is a professor. His current research interests include energy-efficient data conversion technique, low-jitter clock generation, and energy-harvesting power converter design. Dr. Hsin-Shu Chen is a member of IEEE and served as an Associate Editor of IEEE Transactions on Circuits and Systems-II: Express Briefs from 2007 to 2009. He currently serves as an Editorial Board Member of Journal AICSP and a TPC member of RFIT.