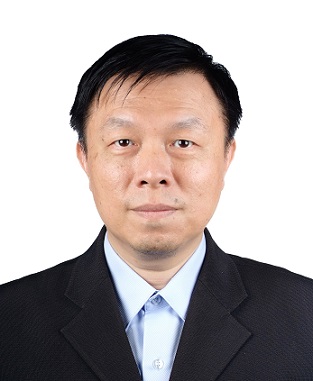 Chien-Chung Lin received the B.S. degree in electrical engineering from the National Taiwan University in 1993, and the M.S. and Ph.D. degrees in electrical engineering from Stanford University, Stanford, CA, USA, in 1997 and 2002, respectively. His thesis work focused on design, modeling, and fabrication of micromachined-tunable optoelectronic devices. Starting August in 2021, he joined the Department of Electrical Engineering of National Taiwan University as a full professor. From 2009 to 2021, he was with National Chiao Tung University (NCTU), Tainan, Taiwan, where he held a position as a Professor. The major research efforts in his group are in design and fabrication of novel semiconductor optoelectronic devices, including LEDs, solar cells, and lasers. Before joining NCTU, he worked for different start-ups in the United States. After graduating from Stanford in 2002, he joined E2O Communications Inc., Calabasas, CA, USA, as a Senior Optoelectronic Engineer. His main research interests were in long-wavelength vertical cavity surface emitting lasers. In 2004, he joined Santur Corporation, Fremont, CA, where he initially worked as a member of technical staff then became Manager of Laser Chip Engineering later. He had worked on various projects such as monolithic multi-wavelength DFB Laser arrays for data and telecommunications applications, yield and reliability analysis of DFB Laser arrays, etc. From 2015 to 2017, he was the recipient of the Young Investigator Research Grant by Ministry of Science and Technology of Taiwan. He has more than 230 journal and conference publications and is a Fellow of the Optical Society (formerly the Optical Society of America) and a senior member of the IEEE Electron Devices Society and Photonics Society.