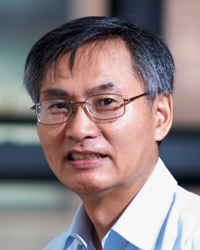 Homer H. Chen  received the Ph.D. degree in Electrical and Computer Engineering from University of Illinois at Urbana-Champaign.

Dr. Chen's professional career has spanned industry and academia. Since August 2003, he has been with the College of Electrical Engineering and Computer Science, National Taiwan University, where he is Distinguished Professor and Irving T. Ho Chair. Prior to that, he held various R&D management and engineering positions at U.S. companies over a period of 17 years, including AT&T Bell Labs, Rockwell Science Center, iVast, and Digital Island (acquired by Cable & Wireless). He was a U.S. delegate for ISO and ITU standards committees and contributed to the development of many new interactive multimedia technologies that are now part of the MPEG-4 and JPEG-2000 standards. His professional interests lie in the broad area of multimedia signal processing and communications.