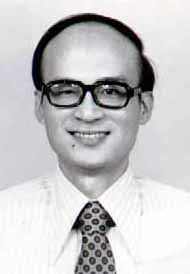 Dean of College of Electrical Engineering and Computer Science

Soo-Chang Pei (貝蘇章) was born in Soo-Auo, Taiwan, China on February 20, 1949. He received the B. S. degree from National Taiwan University in 1970 and the M. S. and Ph. D. degree from the University of California, Santa Barbara in 1972 and 1975 respectively, all in electrical engineering.

He was an engineering officer in the Chinese Navy Shipyard from 1970 to 1971. From 1971 to 1975, he was a research assistant at the University of California, Santa Barbara. He was the Professor and Chairman in the EE department of Tatung Institute of Technology and National Taiwan University, from 1981 to 1983 and 1995 to 1998, respectively. Presently, he is the Professor of EE department at National Taiwan University. His research interests include digital signal processing, image processing, optical information processing, and laser holography. Dr. Pei received National Sun Yet- Sen Academic Achievement Award in Engineering in 1984, the Distinguished Research Award from the National Science Council from 1990-1998, outstanding Electrical Engineering Professor Award from the Chinese Institute of Electrical Engineering in 1998, and the Academic Achievement Award in Engineering from the Ministry of Education in 1998, the IEEE Fellow in 2000 for contributions to the development of digital eigenfilter design, color image coding and signal compression, and to electrical engineering education in Taiwan, the Pan Wen-Yuan Distinguished Research Award in 2002, and the National Chair Professor Award from Ministry of Education in 2002 and 2008. The IEEE Life Fellow in 2015 for recognition of the years of royal membership and support of the activities of IEEE. He has been President of the Chinese Image Processing and Pattern Recognition Society in Taiwan from 1996-1998.

Dr. Pei is IEEE Life Fellow and a member of Eta Keppa Nu and the Optical Society of America.