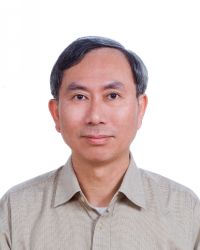 Shyh-Kang Jeng (鄭士康) received the B.S.E.E. and the Ph.D. degrees from National Taiwan University, Taipei, Taiwan, Republic of China, in 1979 and 1983, respectively.

In 1981 he joined the faculty of the Department of Electrical Engineering, National Taiwan University, where he is now a Professor. From 1984 to 1985 he was an electronic data processing officer and an instructor on information system analysis and design at the National Defense Management College, Chung-Ho, Taiwan, R.O.C. From 1985 to 1993 he visited University of Illinois, Urbana-Champaign, USA, as a Visiting Research Associate Professor and a Visiting Research Professor several times. In 1999 he visited Center for Computer Research in Music and Acoustics, Stanford University, USA, for half of a year. He also served as a Session Chairman in 1994 Joint International IEEE/APS Symposium and URSI Radio Science Meeting in Seattle, USA, and 2005 IEEE AP-S International Symposium and USNC/URSI Radio Science Meeting in Washington DC, USA. He has also been invited to review papers for IEEE Transactions on Antennas and Propagation, IEEE Transactions on Microwave Theory and Techniques, IEEE Transactions on Vehicular Technology, and IEEE Transactions on Multimedia. He is also a recipient of the 1998 Outstanding Research Award of National Science Council and 2004 Outstanding Teaching Award of National Taiwan University.  His research interest includes theory and applications of electromagnetics, acoustic signal processing, computational cognitive neuroscience, and cognitive neurorobotics.