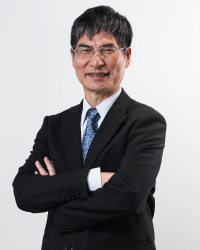 Prof. Liang-Gee Chen (陳良基) received the B.S., M.S., and Ph.D. degrees in electrical engineering from National Cheng Kung University, Tainan, Taiwan, R.O.C. in 1979, 1981, and 1986, respectively. In 1988, he joined the Department of Electrical Engineering, National Taiwan University. During 1993–1994, he was a Visiting Consultant in the DSP Research Department, AT&T Bell Labs, Murray Hill, NJ. In 1997, he was a Visiting Scholar of the Department of Electrical Engineering, University of Washington, Seattle. During 2004-2006, he was the Vice President and General Director of the Electronics Research and Service Organization (ERSO) of the Industrial Technology Research Institute (ITRI). Since 2007, he has been serving as a Co-Director General of National SoC Program. He was the Deputy Dean of office of Research and Development in National Taiwan University during 2008-2009. During 2009-2012, he was the Deputy Dean of college of EECS and a Distinguished Professor of Department of Electrical Engineering at National Taiwan University. He was the President of National Applied Research Laboratories during 2012-2013. He was the Executive Vice President for Academics & Research of National Taiwan University during 2013-2016. He was the Political Deputy Minister of Ministry of Education, R.O.C. during 2016-2017. Currently, he is the Minister of Ministry of Science and Technology, R.O.C. He is an IEEE Fellow from 2001 for his contributions to algorithm and architecture design on video coding systems. In 2009, he was awarded TWAS Prizes and National Professorship. His research interests are DSP IC design, video signal processing and bio-signal processing. He has over 550 publications, 48 patents and 31 US patents.