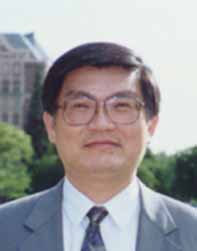 Hung-chun Chang (張宏鈞) was born in Taipei, Taiwan, Republic of China, on February 8, 1954. He received the B.S. degree from National Taiwan University, Taipei, R.O.C., in 1976, and the M.S. and Ph.D. degrees from Stanford University, Stanford, CA, in 1980 and 1983, respectively, all in electrical engineering.

From 1978 to 1984, he was with the Space, Telecommunications, and Radioscience Laboratory of Stanford University. In August 1984, he joined the faculty of the Electrical Engineering Department of National Taiwan University, where he is currently a Distinguished Professor. He was the NTU Himax Chair Professor during 2011. He served as Vice-chairman of the EE Department from 1989 to 1991 and Chairman of the newly-established Graduate Institute of Electro-Optical Engineering at the same University from 1992 to 1998.  His current research interests include the electromagnetic theory, design, and application of photonic structures and devices for fiber optics, integrated optics, optoelectronics, nanophotonics, and plasmonics.

Dr. Chang is a member of Sigma Xi, the Phi Tau Phi Scholastic Honor Society, the Chinese Institute of Engineers, the Taiwan Photonics Society, the Photonics Society of Chinese-Americans, the Institute of Electrical and Electronics Engineers (IEEE, Senior member), the Optical Society of America (OSA, Fellow), the Electromagnetics Academy (Fellow), the Institute of Electronics, Information and Communication Engineers (IEICE of Japan, serving as its Representative in Taipei from 2002 to 2007), and China/SRS(Taipei) National Committee (a Standing Committee member during 1988-1993 and since 2006, and the Commission B Official Member since 2002) of the International Union of Radio Science (URSI). He was among the recipients of the Young Scientists Award at the URSI XXIInd General Assembly in 1987, was elected one of the Ten Outstanding Young Engineers by the Chinese Institute of Engineers in 1990, and one of the Ten Outstanding Young Persons by the R.O.C. Junior Chamber International in 1994. In 1993, he was one of the recipients of the Distinguished Teaching Award sponsored by the Ministry of Education of the Republic of China. He received the Distinguished Research Awards from the National Science Council for 1990-1992, 1992-1994, and 1996-1998. He was awarded the National Science Council Research Fellowship for the period 1998-2004 and the Merit NSC Research Fellow Award in 2004.  He was General Chair of 2013 OSA Topical Meeting on Integrated Photonics Research, Silicon and Nano Photonics (IPR 2013), held in Puerto Rico.