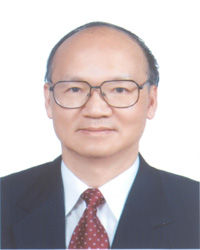 Jingshown Wu (吳靜雄) received the B.S. and M.S. degrees in electrical engineering from National Taiwan University, Taipei, Taiwan, Republic of China, and the Ph.D. degree from Cornell University, Ithaca, NY, in 1970,1972, and 1978, respectively.

He joined Bell Laboratories in 1978, where he worked on digital network standards and performance, and optical fiber communication systems. In 1984, he joined the Department of Electrical Engineering of National Taiwan University as professor and was the Chairman of the Department from 1987 to 1989. He was also the Director of the Communication Research Center, College of Engineering of the university from 1992 to 1995. From 1995 to 1998 he was the Director of the Division of Engineering and Applied Science, National Science Council, R.O.C., on leave from the university. From 1999 to 2002 he was the Chairman of the Commission on Research and Development, and the Director of the Center for Sponsor Programs of National Taiwan University. He was the Vice-President of the university from 2002 to 2005 and the Chairman of Institute for Information Industry from 2006 to 2007. Currently, he is the Chairman of the Aviation Safety Council, the Executive Yuan, R.O.C. He is interested in optical fiber communications, computer communications, and communication systems. He has published more than 200 journal and conference papers and holds 28 patents. Prof. Wu received the Distinguished Research Awards and Distinguished Research Fellow from National Science Council R.O.C. from 1991 to 1996 and from 1996 to 2002. He was the recipient of the outstanding engineering professor award from the Chinese Institute of Engineers in 1999 and the electrical engineer medal from the Chinese Institute of Electrical Engineering in 2006, and the award from CIE/USA in 2009 respectively.

Prof. Wu is a life fellow of IEEE, a life member of the Chinese Institute of Engineers, the Optical Society of China, and the Chinese Institute of  Electrical Engineering. He served as the Vice Chairman（1997-1998）and the Chairman（1998-2000） of IEEE Taipei Section. He is the General Chair of the IEEE VTC 2010-spring. He is also a member of IEEE Communications Society Award Committee from 2006 to 2008, IEEE Communications Society Fellow Evaluation Committee 2008, and the IEEE Fellow Committee from 2009 to 2012.  IEEE Honorary membership committee 2011-2013.