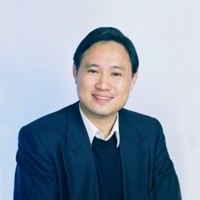 Jyh-Horng Chen (陳志宏) was born in Taipei, Taiwan, R.O.C. on May 17, 1960. He received his B.S. degree in Electrical Engineering from National Taiwan University in 1982.

After two-year's service in Marine Corps as an information officer, he decided to switch and focus his study on Biomedical Engineering. In 1986, Mr. Chen received his M.S. degree in Medical Engineering from National Yang-Ming Medical College. With a Visiting Scholar Fellowship From Ministry of Education, Mr. Chen started his Ph.D. study in the intercampus Bioengineering Program at UCB and UCSF (University of California, at Berkeley and San Francisco) where he received the Ph.D. degree in 1991.

From 1986 to 1987, Mr. Chen worked at Tele-robotics Lab at School of Optometry at UCB studying the optimization angle for 3 - Dimensional 'virtual reality' vision. Later, he went into Nuclear Magnetic Resonance (NMR) Lab at Pharmaceutical Chemistry Department and Radiology department at UCSF working on the basic flow measurements, MR angiography and fundamental in-vivo NMR spectroscopy. Since 1988, Mr. Chen was in the Radiologic Imaging Lab of UCSF as a research assistant. His research interests are in the basic modeling of relaxation times in various biological tissues at different magnetic fields, the measurements of diffusion coefficient and microcirculation in the brain and echo-planar imaging.

Dr. Chen is a member of IEEE, AdCom  (Administration Committee) of IEEE/ EMBS, International Society for Magnetic Resonance in Medicine (ISMRM) and Society of Molecular Imaging.