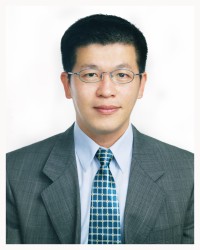 Professor Chiou was born in Taoyuan, Taiwan, in 1969. He received the B.S. and Ph.D. degrees in electrical engineering from the National Taiwan University, Taipei, Taiwan, in 1992 and 1998, respectively. His research was on the numerical modeling techniques for optical waveguide devices. From 1999 to 2000, he was with the Taiwan Semiconductor Manufacturing Company (TSMC), where his interest was on thin film process, especially the plasma enhanced chemical vapor deposition (PECVD) of metal and dielectric films. From 2001 to 2003, he was with the RSoft Design Group, New York, where his research interests were on the modeling of simulation techniques and the developing of photonic computer-aided-design tools for optical devices. In 2003, he joined the faculty of the Graduate Institute of Photonics and Optoelectronics and Department of Electrical Engineering, National Taiwan University. He is currently also with the Graduate Institute of Communications in the same university. Prof. Chiou’s research interests have been focusing on the design and modeling of electromagnetic structures, which includes optical and electromagnetic periodic structures, waveguide and integrated optics devices, EMI/EMC, 3D-IC, and the development and improvement of numerical techniques for the those topics.