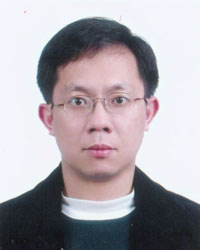 Chih-I Wu joined the Graduate Institute of Electro-Optical Engineering and the Department of Electrical Engineering of National Taiwan University in 2004. His main research area focuses on optical-electronic devices and materials and semiconductor physics, which includes organic light emitting materials, metal-semiconductor interfaces, and heterojunctions in electronic devices and optical-electronics. Prior to joining NTU, he worked at Intel Corporation in the US from 2000 to 2004. His work at Intel was mainly on developing the advanced VLSI process technology, such as Cu and low k interconnects, metal gate materials, and atomic layer deposition process.

Dr. Wu got his B.S. degree from National Taiwan University and M.S. degree from Northwestern University, both in Physics. Then he went to the Department of Electrical Engineering at Princeton University, where he received his Ph.D. degree in 1999. At Princeton he worked on the electronic structures of optical-electronic semiconductors, including nitride-based semiconductors and organic thin films for light emitting diodes. Dr. Wu published more than 80 journal and conference papers and holds several US patents.