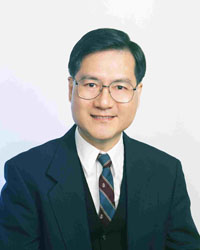 He has been guiding his students to apply different ideas, theories and methods in exploration of various electromagnetic phenomena and possible applications. Recent endeavors include how to merge multiple modes in a dielectric resonator antenna to increase its bandwidth (2007- 2009); how a tsunami wave perturbs the ionosphere and affects the GPS signals, leading to a method to detect a tsunami within 15 minutes of occurrence (2009); how to design 3D miniaturized broadband antennas with size of λ/10 (2010, 2011); how to improve the accuracy of a differential GPS system to within a few cm at a distance of 100 km from the reference station, leading to one possible application to measure the real-time wind field within a typhoon (2011); how to optimize a large phased array with tens of thousands of antenna elements by using evolutionary algorithms (2013-2015); how to reconstruct a better image of a celestial object 60 million light-years from the Earth, based on very-long baseline interferometry (2014); how to design super-lenses with meta-materials to achieve a resolution of λ/30 (2014); how to simulate wave propagation in the lower atmosphere, considering the effects of refractivity profile inversion and turbulence, under different weather conditions (2014); how to model the synchronization among an array of coupled oscillators originally operating at different frequencies (2014, 2015); how to reconstruct high-fidelity microwave images of multiple underground objects (2014, 2015); how to simulate wave scattering by a very large rough surface (2015); how to compensate for the coupling among antennas in an array to improve the direction-of-arrival estimation to within 0.1 degree, even from directions far away from normal incidence (2015); how to evaluate the impact on ground objects from a high-altitude electromagnetic pulse (2016); how to estimate the parameters of an evolving sand-and-dust storm using improved radar equations (2016); how to apply LEO-ground infrared laser occultation technique and a harmony search algorithm to retrieve major greenhouse gas profiles around a specific receiver site in nearly real time (2017); how to apply synthetic- aperture radar (SAR) imaging on ground objects at high squint angles (2017); how to compensate motion errors in SAR imaging (2017); how to apply microwave hyperthermia to treat cancers (2018, 2019); how to process radar signals to estimate direction-of-arrival (DOA) and carrier frequency of multiple signal sources with co-primed array and triply-primed array techniques (2018, 2019); how to compute the brightness temperatures from very lossy medium by using finite-difference time-domain (FDTD) method to obtain near-field bistatic transmission coefficients and by extending the Planck's law to lossy medium (2019).

Documents of these works and other interesting explorations can be viewed at the website: