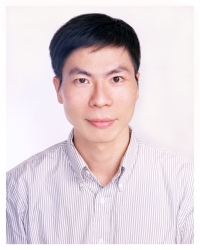 Jiun-Lang Huang (黃俊郎) received the B.S. degree in electrical engineering from National Taiwan University, Taiwan, in 1992, and the M.S. and Ph.D. degrees in electrical and computer engineering from the University of California at Santa Barbara in 1995 and 1999, respectively. From 2000 to 2001, he served as an assistant research engineer in the ECE department, UCSB. In 2001, he joined National Taiwan University and is currently an associate professor in the Graduate Institute of Electronics Engineering and the Department of Electrical Engineering. His main research interests include design-for-test (DfT) and Built-In Self-Test (BIST) for mixed-signal systems, and VLSI system verification.